Theoretical Support for the Barrett Model™

The Barrett Model™ has proven to be a powerful framework for realizing human potential for leaders and organizations across the globe.  The Barrett Model and BVC Analytics have assisted thousands of organizations across 94 countries to increase the health of their organizational culture, and thus, improving outcomes for all of their stakeholders.  At the heart of the success of the model is an understanding of basic human needs and the cultural environment people need in order to thrive.

The latest developments in psychological research on human needs and well-being are helping to validate the existing framework of the Barrett Model.

Originally developed in 1997 by Richard Barrett, the model was formed by leveraging ancient eastern philosophy to extend Maslow’s concept of self-actualization in his hierarchy of needs. The result was a depiction of the full spectrum of needs underlying human motivation and behavior. 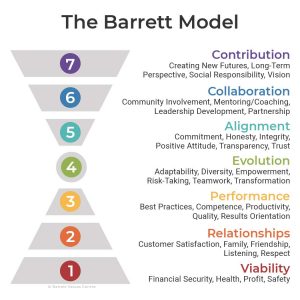 Now the Barrett Model is supported by not only the pioneering work of Abraham Maslow, but also the more recent work of Deci and Ryan’s self-determination theory, Ryff’s model of psychological well-being, Seligman’s work on flourishing, and the resurgent academic interest around Aristotle’s concept of ‘eudaimonia’ and the deep human yearning to live a meaningful life.

All of these theoretical developments are merging together to reveal an underlying consistency regarding human nature and the conditions necessary to facilitate human thriving, so concisely depicted by the Barrett Model.

Self-Determination Theory is a framework for understanding human motivation, which asserts that the fulfillment of basic psychological needs fuels motivation, growth, and well-being.  According to SDT, the needs for relatedness, competence, and autonomy are universal and fundamental to healthy human functioning. The need for relatedness is a sense of feeling cared about through close, secure relationships. The need for competence is a desire to feel effective in one’s environment.  The need for autonomy represents the importance of having volition or choice, and being an agent of one’s own life.  Aligned with Maslow, SDT is built upon the fundamental premise that human beings are naturally inclined toward growth and the realization of potential when afforded the opportunity to satisfy their basic psychological needs within their environment.

The three needs of SDT are similar to the foundational needs located in the lower and middle portions of the Barrett Model, namely the Relationship, Performance, and Evolution levels.  The Barrett Model concurs with SDT and the assertion that optimal human functioning is first established by forming secure relationships with others, demonstrating capabilities, and gaining autonomy for one’s decisions.

SDT has gathered vast amounts of supporting empirical evidence in explaining differences in performance and well-being across multiple domains of research.  The motivational framework of self-determination theory has been applied to a variety of research settings that include work, education, healthcare, athletics, psychotherapy, parenting, politics, and religion. 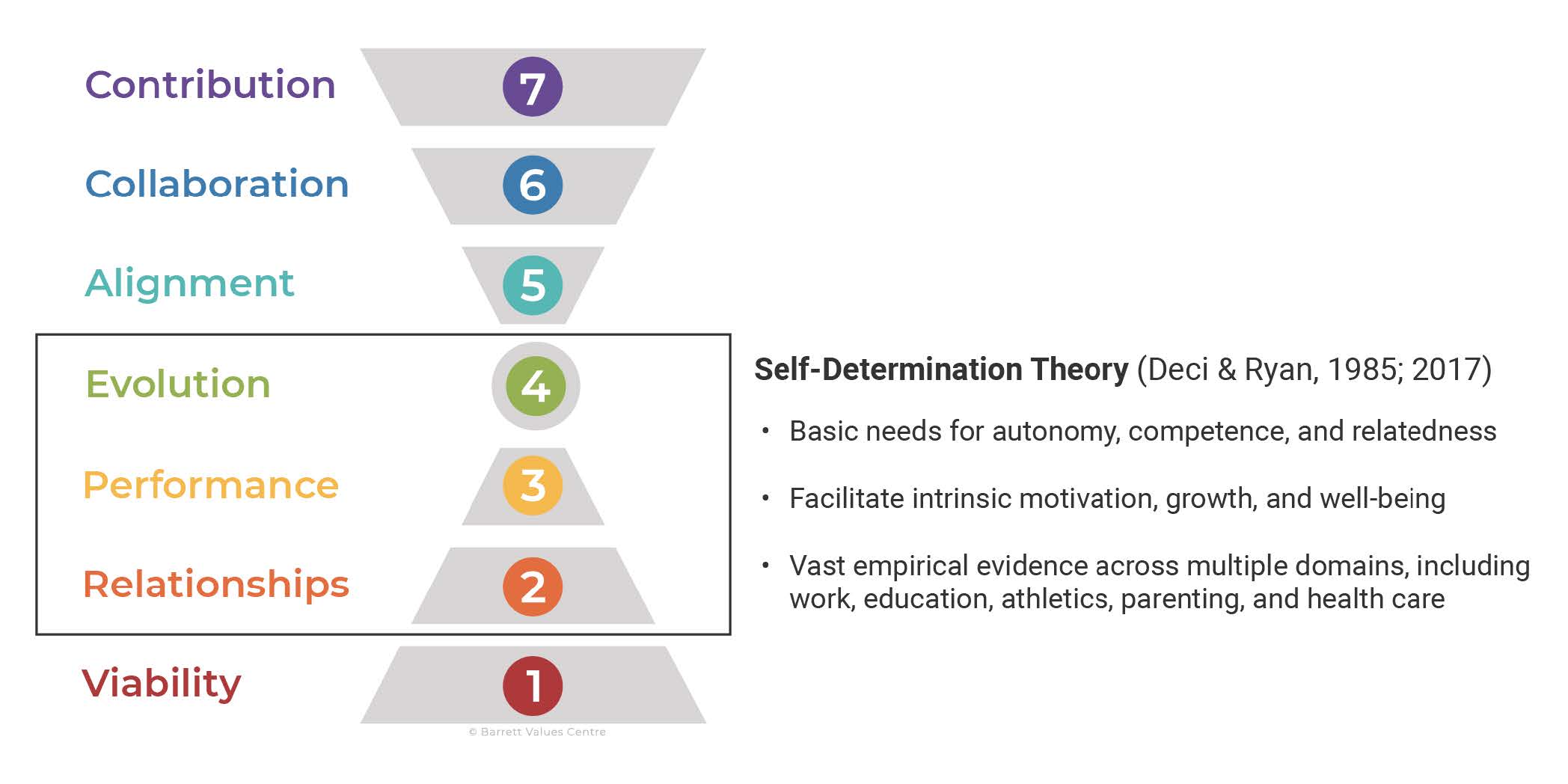 There is incredible consistency between PWB and the seven levels of human needs in the Barrett Model.  Both models address the importance of Relationships and competent Performance (called “environmental mastery” in Ryff’s model). The Evolution level of the Barrett Model incorporates Ryff’s autonomy, self-acceptance, and personal growth dimensions.  Ryff’s “purpose in life” dimension is similar to, but not as fully articulated as the Barrett Model’s levels for facilitating a sense of purpose, which are Alignment (or authentic self-expression), Collaboration (or interconnection), and Contribution. 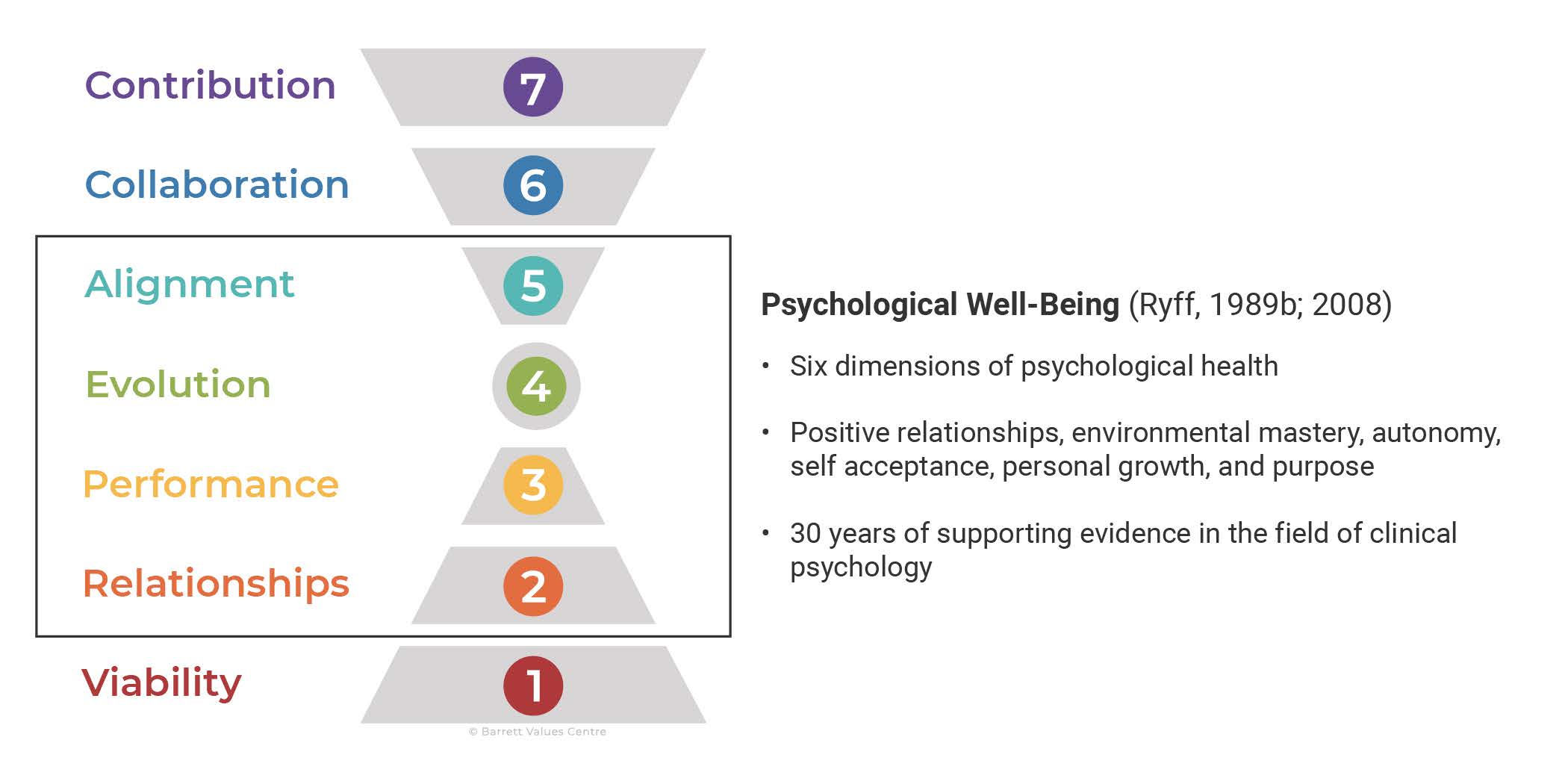 Martin Seligman is probably the most widely known author on human flourishing, whose PERMA model is outlined in his book titled Flourish.  The PERMA model includes five dimensions of flourishing, which are positive emotions, engagement, relationships, meaning, and accomplishment.

The PERMA model is consistent with the Barrett Model’s levels for Relationships, Performance (accomplishment), Alignment (engagement and positive emotions), and Collaboration/Contribution (meaning).  Many studies have found PERMA to be predictive of positive outcomes and well-being, including vitality, life satisfaction, and physical health. 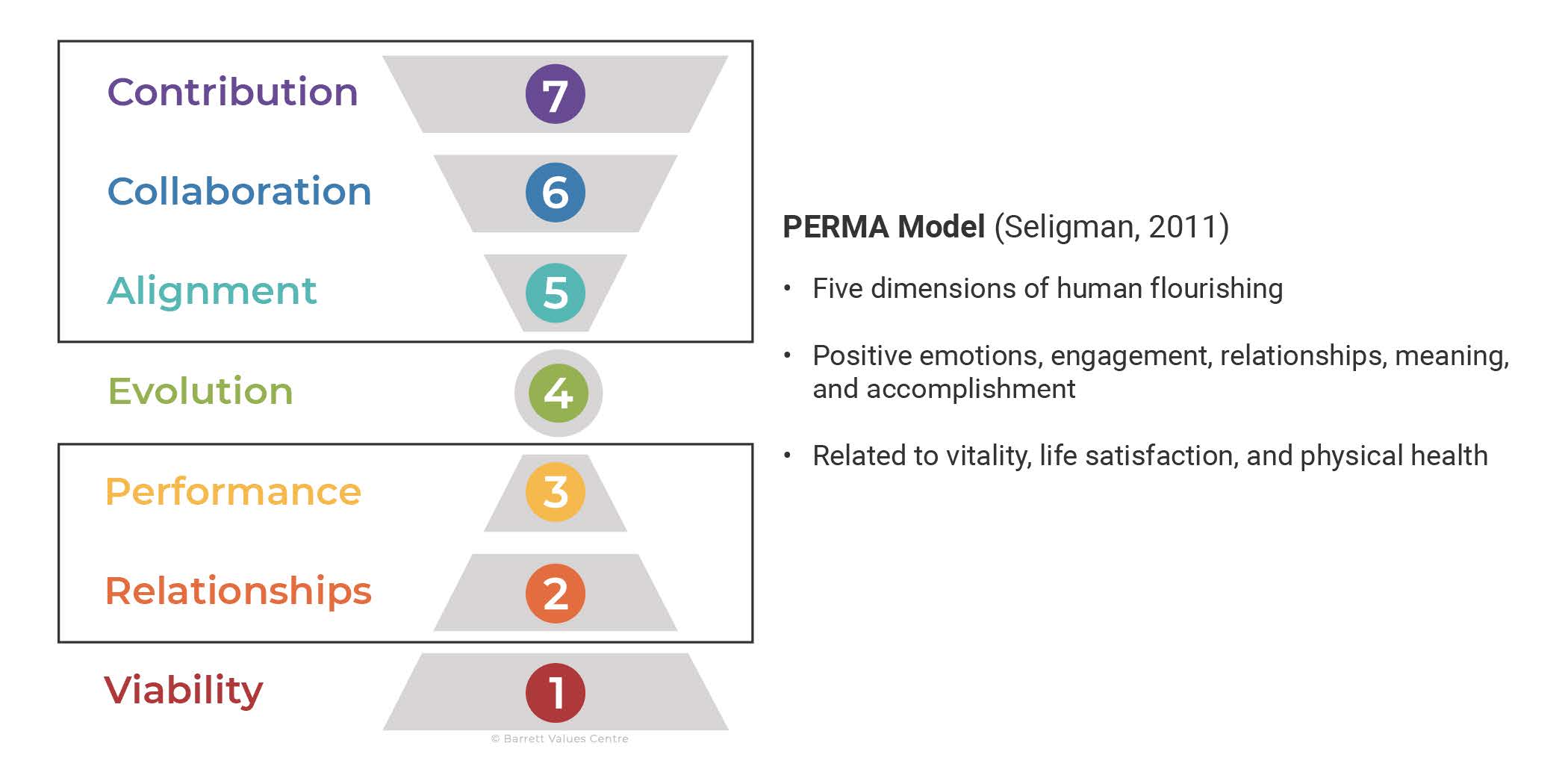 There has been a recent surge of academic interest in the study of human happiness leading many scholars to return to Aristotle’s thoughts on “eudaimonia” and what constitutes the most vital, fullest expressions of human nature and a life well-lived.  Since the time of the ancient Greeks, there has been an ongoing debate over the term “happiness.” In the hedonic tradition, happiness was characterized by the subjective feelings of pleasure and positive emotion.  From the eudaimonic perspective, true happiness involves a deeper sense of fulfillment arising from the development and expression of one’s highest potential.  The term, eudaimonia, although translated to mean happiness, is better thought of as purpose fulfillment or self-realization. The word can be broken down into eu, which means “good,” and daimon, which means “true self.”  The daimon is considered an individual’s essential nature, or innate spirit, and refers to those potentialities of each person that, when realized, represent the greatest fulfillment in living that the person is capable of.  Eudaimonia, therefore, can be thought of as a state of personal fulfillment from living out one’s purpose.  It is said to be experienced when individuals are fulfilling their unique potential in contribution to the common good.

Research has shown eudaimonic well-being to be related to higher long-term physical and psychological health.  Eudaimonia is actually very similar to Maslow’s concept of self-actualization and relates to the upper portion of the Barrett Model, namely the Alignment, Collaboration and Contribution levels.  The full spectrum of the Barrett Model represents both the subjective, hedonic well-being, arising from satisfying the foundational needs, and eudaimonic well-being, arising from the satisfaction of the higher needs of the model. 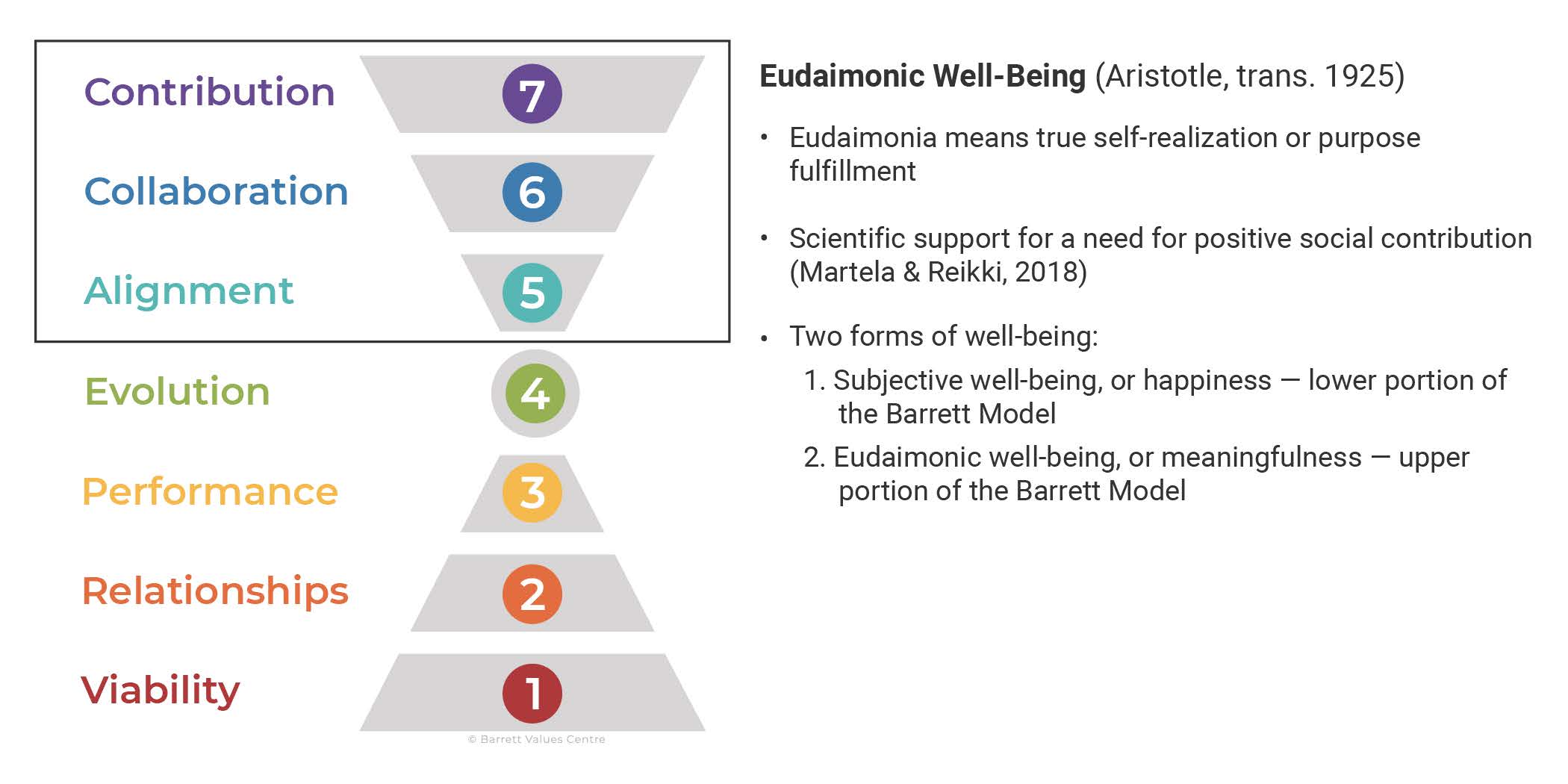 Since the rise of humanistic psychology, and further energized by the positive psychology movement, psychologists have been attempting to characterize the fullest expressions of human nature.  Research on human flourishing has shown the healthiest examples of human nature to be vibrant, creative, growth-oriented, connected with others, and dedicated to making a positive contribution to something greater than themselves.

The Barrett Model outlines a pathway to human flourishing with a three-part framework, which consists of:

2) continuously evolving by embracing autonomy and growth, and

3) working toward purpose fulfillment through alignment with the true self, collaboration with others in shared purpose, and contribution toward the greater good.

Standing on the shoulders of Abraham Maslow, and continuing to be supported by emerging theories in psychology with significant amounts of empirical evidence, the Barrett Model clearly illuminates what is needed for human beings to flourish and thrive. 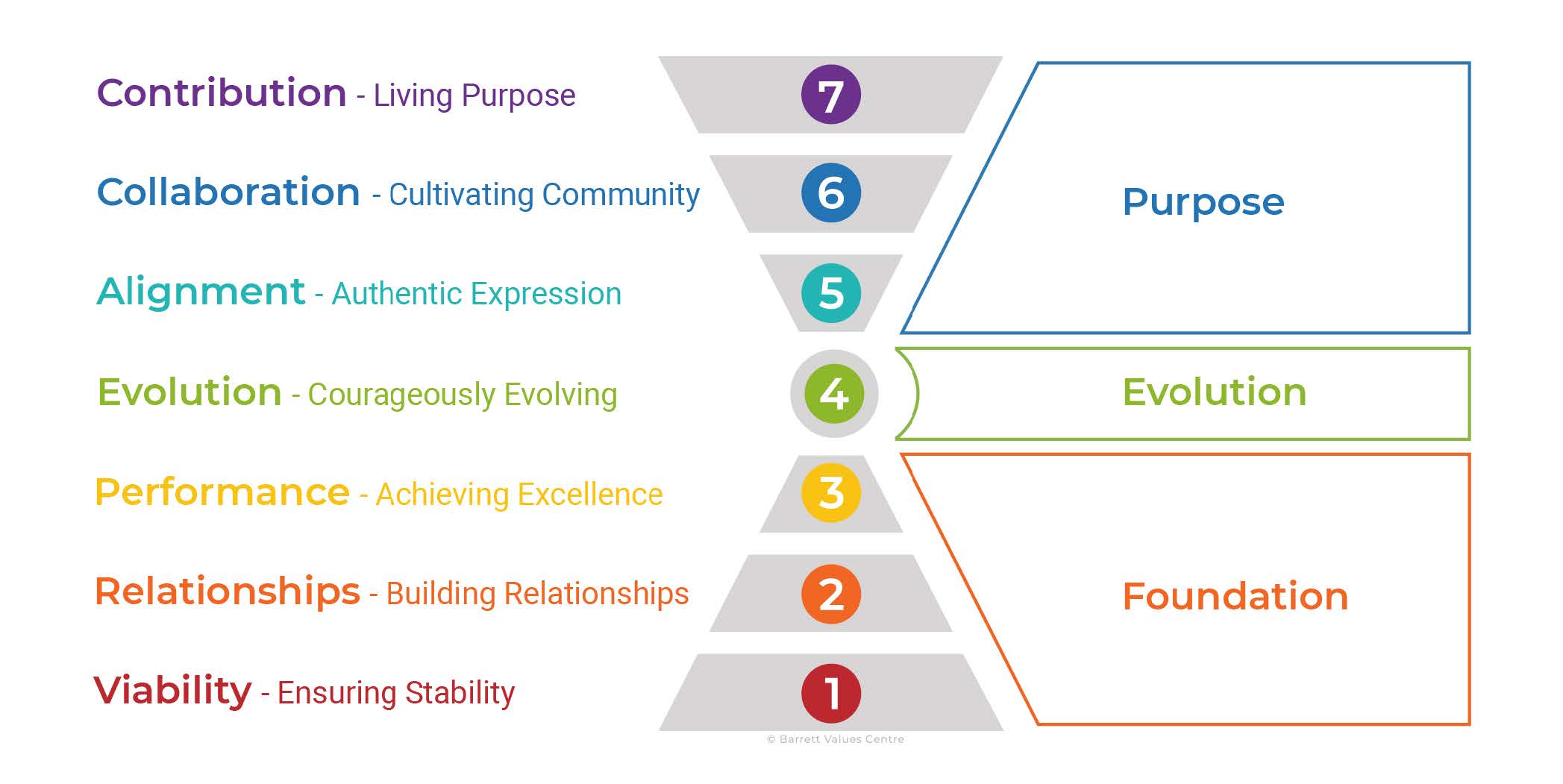