21 Sep The Impact of Culture on Senior Communities 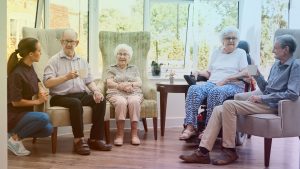 The senior living field has experienced tremendous challenges in recent years including turnover, recruitment, and occupancy. While many communities are struggling to meet occupancy numbers, others seem to be thriving, with plenty of potential residents on the waitlist. What is their secret? According to the results of this study, these thriving communities seem to be doing one thing differently than their struggling competitors: investing in their community culture and realizing the benefits.

According to the National Investment Center for Senior Housing & Care, the senior living industry has seen a surge in industry capacity, increasing 33% since 2008.  Despite the aging population numbers, occupancy has become a big issue in saturated markets since many of the new communities have opened way ahead of the boom in the senior-aged baby boomers, born between 1946 and 1964.

Staff shortage has been another ongoing problem due to the high health care worker demand and subsequent historic low unemployment rates for the industry, a trend which does not seem to be changing anytime soon given the recent pandemic. With an increased number of communities to choose from and a shortage in staff, most senior living communities are now also reporting a battle with uncharacteristically high staff turnover.

A study was conducted by Barrett Values Centre in conjunction with Drive, a culture consultancy firm specializing in serving healthcare and senior living organizations, to investigate the relationships between community culture, staff turnover, and community occupancy. The study involved 31 senior living communities spanning across the U.S.

Organizational culture was measured at each of the communities using a Barrett Culture Assessment. The voluntary online survey was administered to all staff at each of the locations. Staff were asked to identify the values being demonstrated in the organization currently and the values which would be desired in the future.

A primary indication of the health of an organization’s culture is the amount of positive versus negative—or potentially limiting—values that are selected. Prominent limiting values in an organization, such as control or bureaucracy, create unnecessary barriers to performance and efficiency. The metric created by Barrett Values Centre to capture the amount of dysfunction in an organization reflected by the negative or limiting values is called Cultural Entropy®. Across the 31 senior living facilities, Cultural Entropy ranged from a low of 3% to a high of 29%.

The Impact of Culture on Occupancy and Turnover

Using statistical software, the relationships between Cultural Entropy, turnover, and occupancy were analyzed. Community occupancy was the primary outcome of interest for this study—both Cultural Entropy and turnover were assessed as predictors of occupancy. 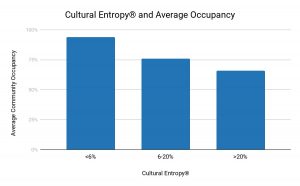 Limitations of the Study

One of the limitations of this study, however, is that we relied upon cross-sectional analysis, meaning occupancy, turnover, and culture were all measured at the same point in time. Before making a strong conclusion that community culture is predictive of both turnover and occupancy, further longitudinal studies would need to be done.

The Power of Culture

This study found a significant correlation between the health of a senior living community’s culture and both the staff turnover and community’s occupancy. This study emphasizes the importance of organizational culture on business outcomes in the highly competitive senior living industry.

Looking into the future, the need for senior living communities is going to accelerate over the next two decades. The National Investment Center for Senior Housing & Care estimates that by 2038 the segment of the U.S. population that is 75 or older is going to double from 22.6 million to 44.2 million.

As demand for senior care increases, we expect community culture to continue to drive performance outcomes in senior communities. With the communities boasting the healthiest cultures able to retain the best staff and attract the most vibrant seniors.

This research implies that communities that boast the healthiest cultures will have the most success in retaining talented staff and exceeding the industry’s average occupancy.

The free Personal Values Assessment takes less than five minutes to complete. Shortly after you have completed the survey, you will receive a detailed report showing how your values map to the seven levels of consciousness model.  The report will also contain exercises you can do to deepen your understanding of your values.