The old hand-out philosophy did much to destroy the development and initiative of aboriginal and islander people. We must try to restore their pride and initiative.
—Eric Deeral, MLA Maiden Speech 18th March 1975

Intervention, paternalism, and prohibition have been traditional strategies to improve the health and well-being of Indigenous people. As reflected by the record levels of youth suicide, incarcerations and child removals in Australia, this approach is not only ineffective, but has further disempowered Indigenous peoples.

Napranum is an Aboriginal community of 830 people on the Cape York Peninsula in remote North Queensland with a history of poverty and disadvantage. Consultant Annalise Jennings happened upon the community while visiting friends and became deeply connected with community elders, who often sat down with her to chat. At the time, Jennings worked in corporate banking  as a risk management and compliance leader. Over a series of weeks, the elders shared with her their desire to build a stronger community, complete with roadways, a grocery store, a birthing centre, and new housing. Together, they began to wonder how her corporate experience might be adapted to help recognize the dreams of this hopeful community. With much excitement, they decided to co-create a program based on these fundamental premises:

Economic opportunity, positive social change, and spiritual growth. A shift in thinking and behaviors across the entire community to create true and lasting change — these were the objectives of Whole of Community Change. Before any of that could be discussed, deep trust needed to be established with the entire community.

To identify core community values and the creation of a community owned vision meant that everyone in the community needed to be welcomed to a seat at the table. Building strong mutual understanding required reverence for elders, something that Annalise could identify with and respect as the result of her upbringing in an Italian family. As weeks went by, a strong mutual understanding began between the members of the community.

Whole of Community Change is the best thing that has ever happened in our community. Annalise Jennings mingled with us. She spoke in our language and with understanding. She listened to us. We trusted her and opened up to her. The energy in the workshops was open, making it possible for us to be clear about our hopes, dreams and future.

Annalise began to identify how government, and strategic partners (NGOs and other entities), could collaborate based on the priorities of the community. Council staff and community liaison officers supported each stage of the program, with support from Dynamic Exchange. But it became clear that interpersonal healing would also need to occur in tandem with the development of new infrastructure to ensure lasting growth.

The Men and Women of Worth programs were introduced by Annalise to re-establish trust not only between generations, but between men and women in the community. Deep personal exchanges took the women out of their comfort zones and broke down personal barriers. The Men of Worth program encouraged self-reflection around personal conflict, values, behaviors and lifestyle. The program ignited a community responsibility around domestic and family violence never achieved in mainstream intervention programs. Whilst the impact was profound at a personal level, the shift in the community came within a matter of weeks and months.

The Whole of Community Change program evolved over five years, and a clear theme emerged: Community growth, when aligned to economic opportunity, provides the fundamental basis for social reform.

Economic Development: Napranum’s status as the principal contractor for Housing resulted in 34 homes and accommodation units created within a two-year period. This led to both State and Federal recognizing and trusting Napranum’s capacity to build further infrastructures such as a Civic Centre with a library, Council Chambers, Cultural and Tourist Information Centre, and supermarket. Expected ROI is significant with government agencies renting premises with a direct financial return to the Napranum Aboriginal Shire Council (NASC).

Social Reform: Napranum experienced a significant reduction in negative social indicators. There are greater community cohesion and participation in community events and employment. The program reinvigorated the elder’s position in the community and a greater connection to Lore and Custom.

Evaluation: A Well-being Index provided accurate information on what worked and what didn’t, so services and policies could be fine-tuned for best outcomes. Barrett Values Centre’s® Community Assessment was used to assess the impact of intervention and empowerment strategies that were put in place. Napranum recorded an outstanding reduction in the Cultural Entropy® score from 32% to 9% in just over 18 months as a direct result of implementing WOCC.

The concepts of community engagement and ownership developed in WOCC now underpin State government’s policy on economic development and community growth. QLD Government Economic Participation Framework and Action Plan ensure that government agencies and service providers do not commence any undertaking in the community without 100% engagement and ownership with the Council. Infrastructure and services must align with the community-owned vision and plan, which have been co-created based on core community values. The vision and values are then used as a benchmark by which to evaluate future policy, services and funding.

Dynamic Exchange formally joined the UN Global Goals Campaign, a set of 17 international goals including the eradication of poverty, the promotion equality, education and well-being. Ten of the 17 UN goals were addressed as a result of the WOCC process. 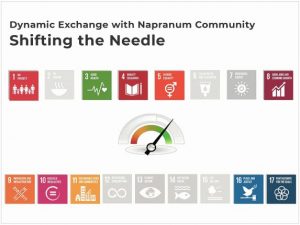 Self-esteem of the people has lifted. There is an increase in local jobs and opportunity. Families are supporting one another. We feel hopeful and excited.
—Relena A., Napranum Community Member

In her unique work, Annalise Jennings has shown what Indigenous people can achieve when given the opportunity to shape their own destiny. This is real community healing in action. It takes a community to build a community. It takes families supporting families.
—Roy Chevathen (Previous Mayor of Napranum, Wik Waya Elder)