Posted at 18:39h in Case Studies by Jarrod Davis
0 Likes

Case Study: Accenture Business Services (ABS)
Clearing the Hurdle from Me to We to Us
August 2012

ABS is a 4800-person global internal services organisation with a strong commitment to living its values in order to maintain and enhance its culture. ABS is a key part of how the nearly 250,000 person Accenture organisation runs its global business efficiently and effectively. Nearly one third of all Accenture’s operations run through ABS. ABS invested in the Cultural Values Assessment (CVA) as a way to measure their culture and determine what they were doing well and where they could improve in support of their overall Human Capital strategy. In February 2011, all ABS employees were asked to take the CVA and the top executive team of 12 senior leaders also received Individual Values Assessments (IVAs). The results revealed a culture grounded in Level 3 (achievement) and Level 4 (teamwork) with a call to move more
fully from a focus on individual achievement/performance (me) to a focus on internal cohesion, people development (we) and growing alliances through external partnerships (us).

The analysis of the initial CVA led to a focus on three pivotal initiatives across three Human Capital work streams. These initiatives were aimed at moving the culture forward in alignmentvwith their top desired shifts:

The initiatives are continuing to be designed and facilitated by the ABS Human Capital & Organisation Effectiveness Lead with the complete support of the global senior team. This case study will focus on what the senior team has been doing to support the culture alignment effort.

The executive team wanted to define their desired culture to enable their business strategy, and they chose to use a values-based approach as the standard means of definition. Care was also taken to ensure alignment with Accenture’s core espoused values. Because Accenture’s core values are well-known by all employees, the executive team saw the values-based approach as a logical and comfortable way to define the ABS culture, and measure how well they were performing against the desired culture. They wanted to use these findings to create a plan for aligning their culture, values, leadership and talent development initiatives. In 2011, they conducted their first CVA along with IVAs for the senior leadership team.

The organisation had 13% overall entropy. This means that only 13% of the values selected were potentially limiting, which is a relatively low level of perceived dysfunction. Because the mission of ABS is to drive out cost in the organisation, it was not surprising that the value of cost reduction was the number two value and many of the leaders did not see this as a limiting value. Other key potentially limiting values were bureaucracy, long-hours and internal competition.

They invited customer stakeholders to participate in their CVA, but the participation was very low which suggested that they were not fully engaged. This confirmed that they needed to focus more on establishing a “business partner” relationship with their customers. In turn, and as a direct result of the survey results, this became one of the important components launched as part of the overall culture change initiative.

In fact, the executive team took several actions as a result of the
values assessment:

Meeting the organisation where they are
Research indicates the vast majority of organisations are struggling with the shift from a focus on individual excellence and performance to teamwork and innovation (Level 3 to Level 4). As consultants, we must find ways to help leaders make this shift using language, logic and measurements that prove the “soft-side” of business delivers hard results.

Leveraging breakthroughs in the neuroscience of leadership and
human development
Effectively transform a senior team and their entire organisation into their desired state as defined in their CVA through the application of a blended learning approach tied to Level 6 leadership values of “collaboration” and “coaching”. The blended approach included workshops, assigned reading, team coaching, 1- on-1 coaching, buddy-triad practice teams, and on-the-job
application.

Employing the Four Pillars of Conscious Capitalism
There is a higher purpose to our work. It is NOT just about the money; it’s also about developing people and making the world a better place. This approach provides a holistic, easy to use measurement of consciousness of the organisation’s leaders and culture. It takes a real-world view by addressing the need for hard measures of the “soft side” of business.

Senior Leader Support
Perhaps the most important key success factor was having the full trust and support of ABS’s senior-most leader. Without his support and belief in this work, it is unlikely ABS would have even gotten out of the gate very far… certainly we wouldn’t have been able to accomplish the senior team cohesion work that has enabled the larger cultural shifts. 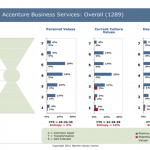 READY FOR YOUR ORGANISATION TO THRIVE?